After a very pleasant nights sleep at the Hazelwood House B&B, Yineka-mou and I got up about 7ish, looked out the window to check the weather, and looks like we struck it lucky again…the sun was just coming up and it’s gonna be another perfect sunny day. Not typical Welsh weather at all. Breakfast in the dining room downstairs.. the full ‘Welsh’ one for me…it’s basically the same as a full English Breakfast…but in Wales!

Very nice though, seated in the sunny ‘conservatory’, hushed voices of the other guests.. typical B&B style… and very friendly service from the the staff. Weirdly, she was a South African lady from Capetown…how the hell did she end up in Bridgend. I Overheard one of the guests, a very smart well spoken lady in her late 70’s, talking about the time she bumped into a German Officer from the PoW camp in Porthcawl when she was a young girl out cycling… I’d heard about this PoW camp as later they had a breakout, it’s quite famous. (On the night of 10th-11th March 1945, Seventy German prisoners tunnelled to freedom from Camp 198 in Bridgend. It was the biggest escape attempt made by German P.O.W.s in Great Britain during the Second World War.) Anyway, she reminisced how some of the German officers were allowed out unescorted around the town, which is when she came across one, in full uniform, staring out to sea. She says she stopped and spoke to him, and he was very polite and proper. When she got home and told her Mother however, she did get into trouble. Apparently, these German Officers used to be invited into peoples homes for dinner or tea etc … hard to imagine eh… but very friendly the Welsh.

After breakfast we drove the 7 miles back to my Aunt’s bungalow in Garth, Maesteg, and had the first of several cups of tea… my cousin John, and his wife and son, Jill and Matt, arrived soon after, having driven up from High Wycombe… no way was John, Dilys’s nephew, going to miss an occasion to get together with all the rellies….after another cuppa together ( the third or fourth) we all set off for the village of Coyrahen, halfway between Maesteg and Bridgend. As I said in earlier post, my father was born here, in the main street , (there was ONLY the one street!) at 3 Victoria Buildings, a very long terrace of houses that took up almost the whole eastern side of the village.

My mother and father used to go for walks together along the banks of the River Llynfi that flowed along just behind the village, when they were still a ‘courting couple’ back in 1940…it was to this spot we were going, to scatter her ashes. This was her wishes, and one she made me promise I’d keep. So Aunt Marion (Marie) , her daughter Dawn, John, Jill, Matthew, Yineka-mou and myself, set off at about 11ish…to honour my commitment….and with Aunt Marion holding on tightly to the box containing her dear sisters (my mums) Ashes.

I’d earlier downloaded from itunes the songs ‘ We’ll keep a welcome in the hillside”, and the Welsh National Anthem, ‘Mae Hen Wlad Fy Nhadau’ (Land of my Fathers), both of which were favourites of hers. I thought it’d be a nice touch, and a fitting tribute, to play these songs during the ‘scattering’…..So there we all were, making our way through the long grass, still wet with a heavy due, across this large field, to get to the spot by the river bank. ( I can see why my Dad used to bring her here, it was a quite isolated, very quiet and a very beautiful spot…ideal for all the privacy you might need while ‘courting’…) By the time we arrived at the exact place, which Dawn and YM led us to, our shoes and socks were soaked from the wet grass.( as I said earlier, Dilys was a clever lady, and had shown Yineka-Mou and also my daughter, the exact spot when they were together in Wales 15 years earlier. To be certain they wouldn’t forget, she also took the precaution of showing the exact same spot to her niece, Dawn.) I opened my ipad and attached a small pair of speakers to it, and handed it to Matt to operate. He opened up the Welsh National Anthem first, and as the music played, I began the task of scattering my dear Mums ashes around and onto the vegetation aside the banks of the Llynfi. The Welsh Anthem is very moving at the best of times, and this was the worst of times….as the strains of ‘Land of my Fathers’ ended and the even more moving ‘We’ll keep a welcome in the hillside’ began, ( always a tear-jerker, even if you had no welsh blood in you) we all added even more moisture to the already wet grass… I hadn’t realised just how many handfuls of Dilys’s remains there were in that container…and I didn’t want to just tip the ashes out, but respectfully scatter them by the handful…after a bit I called up Aunt Marion, Dyls sister, to also help with the scattering…and then Lynley came up to do her bit, followed by the others… Dilys would have been very happy with this small but very emotional ceremony…and though I doubt that I looked far from happy at that moment, inside I was…. happy that at last, she was once again back home with my father…. and also relieved that my duty was done.

Later that afternoon, we all went to the Pub in Maesteg where we were having a ‘Wake’ for Dilys… originally, I’d asked my aunt to have it at her home, at the bungalow, as I thought just a few of my cousins would turn up for it…when my aunt phoned me in Australia a week before, she informed me that at least 40 relatives had said they were coming…. I have this many? I hadn’t realised that! Anyway, a change of plan was called for, so on my behalf my aunt hired a room at the local pub in town, and organised the catering. Sure enough, over 40 did turn up, most of my cousins on my Mum’s side of the family, along with their wives and partners, their kids, and grandkids…it was great to catch up with my cousins, many of whom I hadn’t seen for nearly 40 years… some of them I hadn’t seen since they were small children… I gave a short speech, thanking them all for coming…how their Aunt Dylis was proud of them all, and how she loved them all…. I told them a few stories about her life in Australia….and how how proud we both were to be born Welsh…an especially important attribute in Australia…that the best thing about being Welsh there was , it meant that you weren’t English…so couldn’t be called a ‘pommy bastard’.!

Tomorrow Yineka-mou and I have to bid ‘Hwyl fawr’ to Wales, and leave it all to soon, to go visit my old shipmate Pete, who lives in Lyme Regis on the South coast of England….. 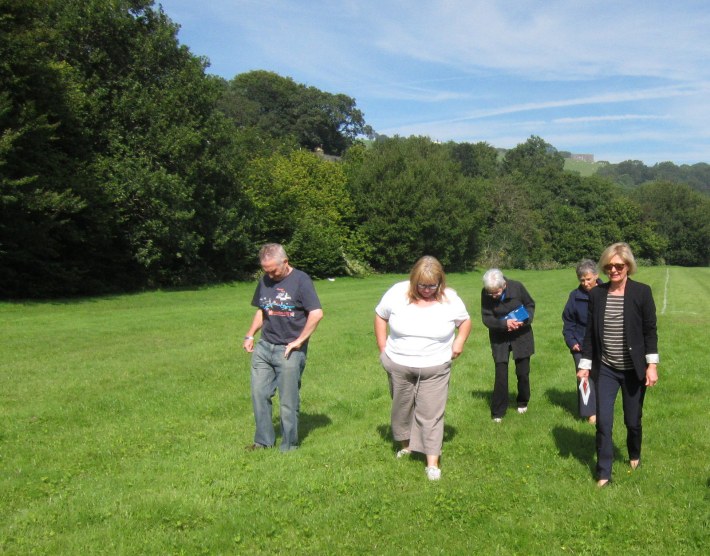 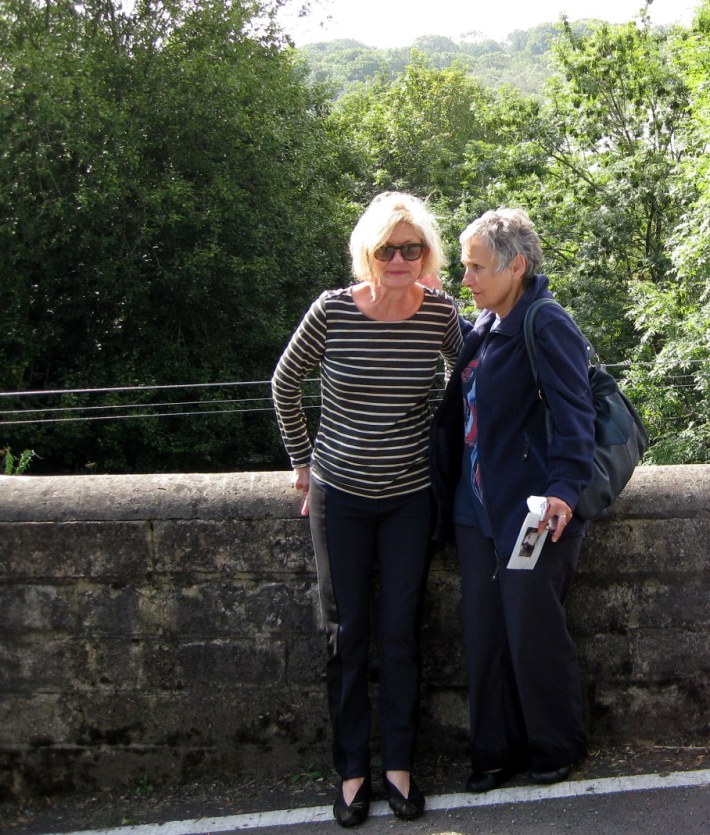 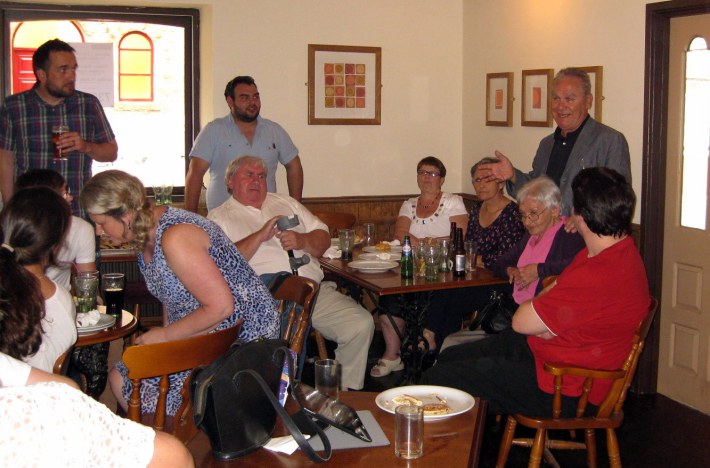 In between Aunt Marion and Dorothy.

Yineka-mou with Christine, a friend from our Duty-Free days.