I certainly didn’t think so at the time, but Oman Air did us a big favour in cancelling our original flight, and forcing us to arrive in Greece a day earlier than planned, rather than a day later. Had we stuck to the original plans, we’d still be in Athens right now, instead of enjoying life here on the beautiful small island of Koufonisi. Why is that? Well, on Friday, the weather turned crazily windy, gusting at over 100 kms per hour, making the seas so high, that for safety reasons, ALL ferry boat services were cancelled! Yep, no boats to the islands, not even the big Blue Star boats! Luckily for us, we had already left Piraeus (the port for Athens) on Thursday, on what would turn out to be the last ferry to Koufonisia before the authorities decided to suspend all ferry services to the Aegean islands.

We left on the large car ferry, Hi Speed 4, a catamaran which was built at Henderson Shipyards in Perth, so feel very safe. You couldn’t help but notice, with a logo that featured a kangaroo and emu, but even the hand-dryers in the toilets were Made in Australia.   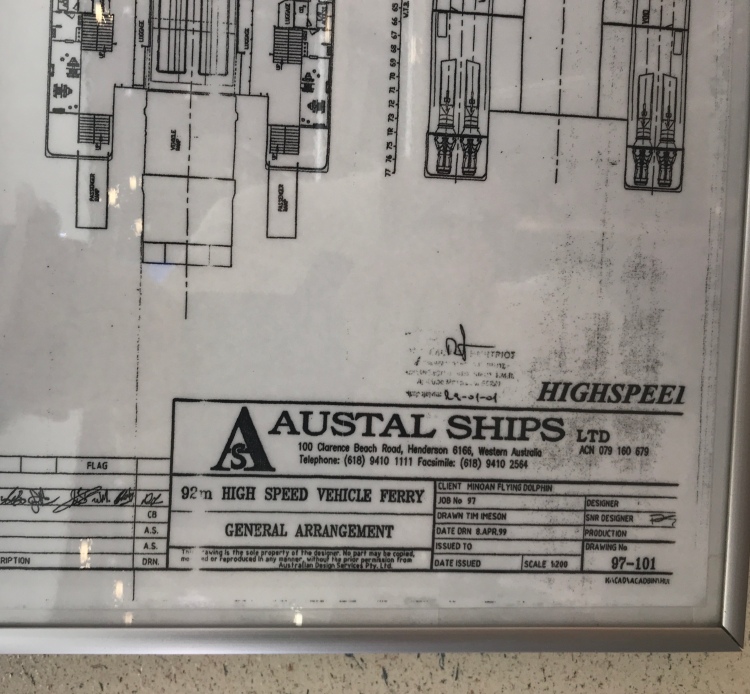 As the hi-peak season is now over, it was relatively uncrowded on board, and in our ‘Πρωτης Θέσης VIP lounge, on the upper deck, made for a very comfortable and fast journey, stopping only at Paros and Naxos, before arriving in Koufonisia at 12 noon.

As usual, Costa Brassinos, the Port Captain, was on the wharf to oversee the normal chaos, as well as to check out who was arriving. It wouldn’t be the same if we didn’t get his special greeting, a big hug for me …and an even bigger, longer and more passionate hug for YM……Mmmm!

At the end of the wharf, the cars, trucks and minivans from the accomodation providers were all lined up waiting for their disembarking passengers, and as we knew many of the drivers, we spent the next 5 minutes shaking hands, hugging and sometimes kissing, Greek style of course, and answering the normal questions….how long you stay….where you stay….pou einai o Beellee? ( where is Billy?) He’s my best friend, who because we are usually on the island together, get asked this question many times over the next few days….. Billy is a very popular boy here!

The only car and driver not waiting on the wharf was the one supposed to pick us up, Georgos from Pambelos. After about ten minutes, the only passengers left on the wharf were two lonely Australians….us! Captain Costa approached and asked who we were waiting for “Pion Perimenis?”. When I told him that it was Georgos Kovalos he gave a shrug of his shoulders, snorted and walked away! I didn’t have Georgos’s phone number, but I did have his wife’s number. I knew she had gone back to Athens with their young son for the start of the new school term, but decided to call her anyway. “He’s not there?” she asked, followed by a colourful expletive! Then “I will call him now, you wait”

So we waited…and waited. We had no option really, as we had far too much luggage with us, and Pambelos was too far away to walk with our cases……there is only the one taxi on the island, owned and run by Captain Costas son, Roussetos, and it was not at its Cab Station.

Five minutes later we spot a car speeding across the town beach ( a shortcut the locals use to get to the wharf ) heading in our direction… it was Giorgos and his old Jeep. He arrived, with a smile as big as his face, and without a word jumped out of the Jeep, grabbed YM and myself in a group hug and more Greek style kissing…. once on the left cheek, once on the right, then another for luck on the left again. “Lipamei…Signomei” he shouted ( so sorry, I’m sorry). You can’t help but like young Giorgos, he’s such a lovely generous man, impossible to get angry with, and I’m on a beautiful sunny Greek island, so why get annoyed about anything. Giorgos doesn’t speak a lot of English, less even than I can speak Greek, though YM believes he knows a lot more than he lets on, so we converse mainly in a combination of Greeklish, which seems to work very well.

Arriving at our Villa Pambelos, it’s good to see that Giorgos has kept the same lovely staff as before, and we are warmly greeted by Lola, the cleaner/housekeeper from Egypt, and by the crazy Renata, the cook/housekeeper from the Dominican Republic. Renata, who speaks with a weird mixture of Spanish and Greek, but never English, welcomes me with a “Hola…. Yia Sou”. It’s good to be back, that’s for sure, and lucky to be here today.

It was only yesterday morning, Sunday, that some of the larger ferry boats, like those of the BlueStar line, were able to resume sailing, while many of the smaller boats and catamarans were still stranded in port, as the wind hasn’t stopped blowing.

Some friends of ours, who were due here on Koufonisia last Friday to attend a birthday party this week, are still waiting on a boat to bring them from Mykonos, but hopefully they’ll be arriving this afternoon, Monday, providing that the wind continues to die down.

Anyway, none of this affects us, as we are very comfortably ensconced in our small villa at Pambelos, situated high above Harokopou Beach, on the protected side of the island, with not a care in the world.

It’s so great to be back in Koufo again, and I’m still surprised on how many people I know here, met on previous visits to this small island. It’s hard to walk more than a couple of hundred metres before bumping into some old acquaintance or other. Don’t let me give you the impression that the island is crowded though, as that’s simply not the case. It’s just that the Chora, (the town) is so small, with basically only the one street meandering thru it, that it’s almost impossible to avoid meeting people. Add to that, there aren’t many roads outside the Chora either, with the main one being an unsealed dirt road leading to, and ending at, Finikas Taverna, about a 15 minute walk from the Chora. Almost everyone here uses this track to walk to the sandy beaches and beyond, firstly Finikas Beach (Harokopou) in front of the taverna, then Fanos beach, which also has a cool beach-bar, then over the cliff walk to our favourite, Platia Pounta beach, but called Italida by everyone, because an Italian lady once owned the house behind the beach. ( it’s also the naturist beach, or as my mate Petros named it, ‘Dangly Bay’), then a 15 minute walk along the cliff-top goat track to the long sandy beach in beautiful Pori Bay. (unless the wind is blowing, as it is right now, when Pori is pretty exposed)

On Friday afternoon, YM and I decided that a walk to Pori, to have lunch at Kalofego, considered to be one of the best restaurants in Koufo, and a favourite of ours, would be a good idea. On the way there, YM became concerned that we’d not be able to get a table, as it’s a very popular spot. Approaching the restaurant, we noticed that all the tables were available, take your pick, so no problem there. We were warmly greeted by Eleni, the waitress from previous seasons, who, after completing the obligatory hugs and air-kisses, told us that they were closed. Her actual words, spoken in Greek, were translated by me to mean, “we are closed today”. I replied “Δεν πειράζει, θα επιστρέψουμε αύριο στη συνέχεια.”….. “never mind, we will come back tomorrow then” …… “ όχι αύριο, του χρόνου” she replied…..which means, “No, not tomorrow, next year!” Kalofego had closed for the season, what a bummer!

Dissapointed, we headed off to the only other taverna on the beach, the Pori Cafe, which is far more traditional, old fashioned even, and decidedly uncool, compared to Kalofego. Foregoing lunch, as after looking at the food on offer we quickly lost our appetite, we settled on a beer and a glass of white wine, nothing wrong with that. Thirst nicely quenched, I call for the bill….to logariasmos. “Endeka euro” he said. I thought I’d misheard, so I asked again “endeka euro” he replied curtly, then in English, repeated “eleven euros”. “Yes, I can understand Greek mate, but what I don’t understand is how you can charge 11 euros for a small glass of nasty house wine ( I was going to write ‘cheap’ house wine) and a small bottle of Fix beer. That’s more expensive than they charge on the Hellenic Seaways Ferry Boats. Well, Pori Cafe is one place I won’t be going back too again in a hurry.

Later that evening, talking with one of the locals at the shop where YM was buying a scarf…..needed for to keep her hair in place with the windy conditions on the island….I related the story to him. He looked at me, shrugged his head in that peculiarly Greek way that means WTF, and just said “Mallacas, they are mallacas.”

4 thoughts on “The Last Boat out of Piraeus?”