Barcelona…. and why, every time I hear that word do I think of Freddy Mercury and Montserrat Caballé, singing their hearts out….What a great city! All that our friends told us about the place was true…. except for how cold (and wet) it could be…in late May too!

We have now left Barcelona after a fantastic four nights. Apart from catching up with my old ( as in long time) best mate BL, we also met up with our two really good friends from home, PM and his wife GP. ( We are now in their car with them both, on the way to spend a few nights with them at their second home in a village in the South of France, near Toulouse.) 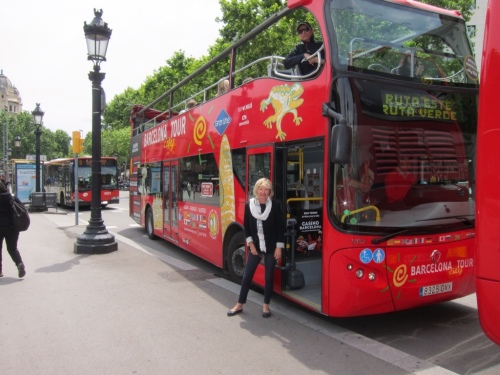 It has stopped raining…yeahh. But why is it so quiet outside….it seems it's a public holiday in Spain…. to celebrate Whitsun ( whatever that is?) After a very nice civilized continental breakfast at the Circa 1905, and on the advice of friends who'd been here before, and despite my aversion to looking, or acting, like a typical tourist, we decided that our best bet would be to catch one of the red double-decker hop-on/hop-off tourist sightseeing buses.

We were told it would help us get our bearings around the city, and enable us go back and explore in detail those spots that appealed. Also, as it was a public holiday, all the shops, markets etc were again closed, so what else were we to do. We walked about 50 metres to the Tourist Bus Stop, just opposite Gaudi's 'Casa Mila' …. it might have stopped raining but the skies were grey, the wind was blowing and it was COLD. We weren't prepared for this as we'd brought no warm clothing with us….. we also couldn't go and buy anything more suitable for a winters day, as shops were shut. We woke up the lady on the bus who collects the money…paid 26 euro each, and was given a set of ear-buds to plug in to listen to the commentary, along with some maps of the bus route…and a booklet of discount vouchers (which we never used, as no wish to get a discount at a Flamenco Dinner with 4 courses and all you can drink, nor the 2 for price of one offer at the Water-Fun Park….The Water-Fun Park…you'd need to hire a wet-suit first!)

The top deck was, not surprisingly, empty of any passengers, so YM had the choice of where to sit… which was anywhere you liked except for somewhere warm …she only lasted about 2 blocks down the 'de Gracia' when she decided to go downstairs and find a seat in the comparative warmth of the lower deck. About 2 minutes later, I also decided that enough was enough, and bugger the better view, I just wanted to de-freeze, so I joined her. YM's favourite seat on any bus ( or train, or plane) is the very front seat opposite the driver, and as luck would have it, at the next hop-on/off stop, two people vacated these front row seats, and YM, on the mark as usual, quickly took up this prime viewing pozzi. We stayed in these seats for almost the whole round trip journey, about three and a half hours…. but I desperately needed a toilet stop, so at the Sagrida Familia we had to disembark, on the look-out for a toilet..or a bar with a toilet. ( didn't even have time to take a look at this beautiful building) Having found one, and a seat inside the bar in the warm, we thought a bite to eat would be a good idea….but the food on offer was pretty awful, and if the kitchen was only half as dirty as the toilet was, then that was a wise decision. 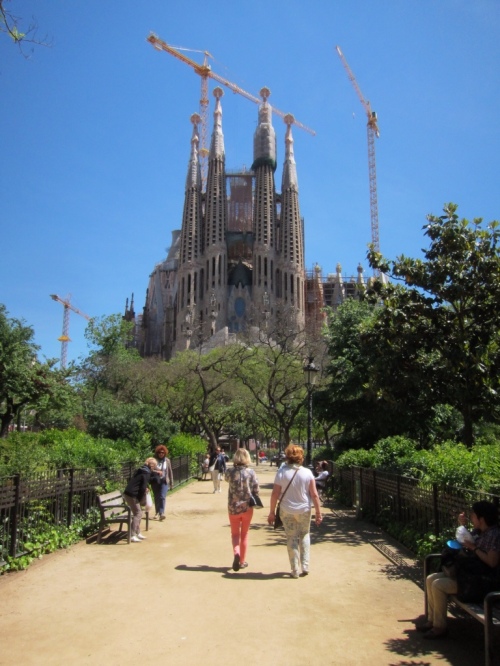 We headed back to the de Gracia street, as I knew there were lots of good tapas bars there. By now, the weather had improved, the sun was out and it was, comparatively, quite a bit warmer. We found a good little place at the corner of deGracia and Carrera Arago, called Txapela, sat outside and ordered from a menu with lots of pictures of the food. (yet again I'm breaking one of my prime rules of travel here…never eat at a place that has pictures of the food on the menu… or if the menu is in multi-languages…. and this place had both!) 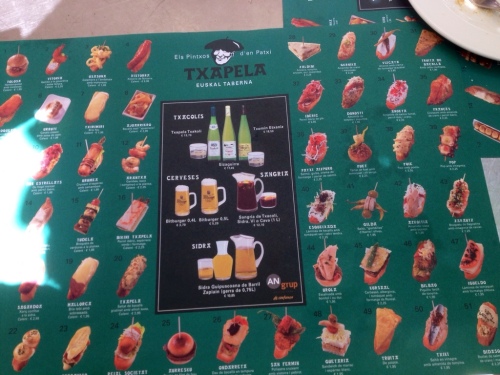 I have to concede though, that the bite size tapas selection was great, so we ordered half a dozen and they were really TASTY. I sent SMS text message to BL and told him where we were, and he texted back that he'd be there in 10 minutes. After he had turned up we had some more tapas and soaked up the atmosphere ( and the Vino) sitting in the sunshine watching the passing parade of people. The one thing I didn't like about the place though, was the short squat glasses they served the wine in… weird. 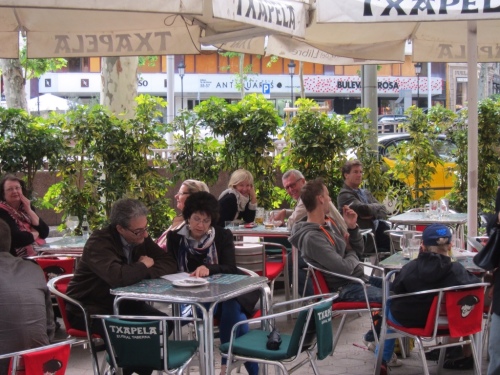 We left Tapas Bar Txapela and walked back toward our hotel, and on the corner of Ramblas de la Catalunya and Calle Provenca, we found a great little wine bar and shop. I bought a bottle of Rioja for 8 euros, and we took it back to the lounge/sitting room of our hotel . We ordered another bottle of White for YM, Agricola Sant Josep, then sat back with YM, and BL and relaxed in the very comfortable and elegant surrounds of Circa 1905. The plan was to have a few drinks, shower, change and go out for dinner. Now I'm not sure if you are aware, but the Spanish just don't eat dinner very early….. so what's the rush. We finished off the two bottles of wine, and by this stage Jet-Lag caught up with YM ( at least that's her excuse!) and she decided to have an early night, and call it a day. So BL and I found ourselves stood-up ( again!) , but still hungry ( if not thirsty), and so we caught a cab to Plaza Real, just off Ramblas, where BL knew of a really good restaurant that served charcoal grilled chicken, amongst other specialities. ( look it up, http://www.loscaracoles.es ) The restaurant, Los Caracoles was BUSY… we had to wait at the bar while a table could be found… but it was no problemo… 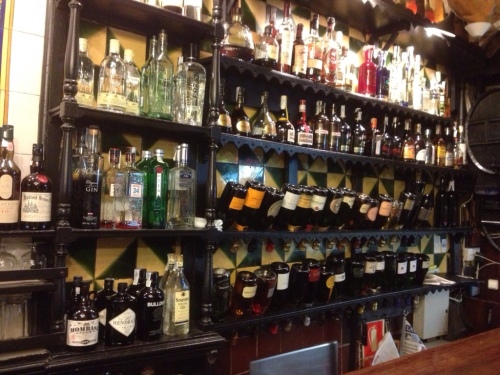 …. after a short while we were led through the kitchen…yes, that's not a mistake, through the middle of the kitchen, to our table for two upstairs… really really romantic ….. if only YM had been my dining companion instead of BL! We both ordered the house speciality, the famous grilled chicken, but the waiter told us it was 'finito'. So instead we ordered fish… Hake, from the lake, the waiter said…but in a strong spanish accent.

I heard the sound of flamenco music, and a minute later we had three hombres in Spanish national costume in front of our table, playing guitars and singing ” …sweet, Spanish eyes….” to us….. I just knew what the waiter was thinking, the smarmy spaniard. BL quickly pulled out a 5 euro note from his wallet, handed it to them, and said he had a request. 'Si Señor, no problemo….what you like” “Just play 'far away' please!” says BL….

I could have forgiven BL for bringing me here if the food was good, but it wasn't… my fish quite obviously hadn't been anywhere near a lake…. nor river, or ocean…. for a good few months…. but the chips were good and the bread was good, so it wasn't a complete failure.

We had one more drink, at the Restaurant/Bar Lobo, on the way back to our hotels, and I made a note to come to Bar Lobo again…a modern classic sort of place, the complete opposite of Los Caracoles….. and no singing waiters. 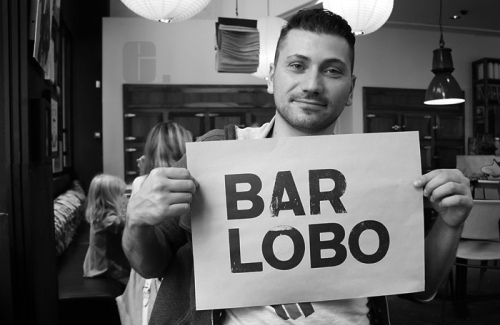