Terminal Sickness…. relax…it's not me that has it, at least not yet ( everything comes to those who wait!)…

Driving to Perth Airport tonight with Yineka-mou to catch the Emirates flight to Dubai and then Barcelona… factually that's incorrect… we're being driven by YM's best friend AJ, who kindly offered to pick us up from home and drive us to the airport….(Thanks AJ)…. the taxi service in Perth is notoriously unreliable, especially on a Saturday evening, so that made this journey much less stressful, wondering if the cab you'd booked from Swan Taxi's would actually turn up. ( AJ didn't let us down, she was right on time…. but where was your Chauffeurs cap AJ?) The Transport Minister, 'Sniffer' Boswell, is attempting to do something about it though… his plan is to allow the cab company to charge an excess of 10 or 15% of the fare IF THEY TURN UP ON TIME…. or WITHIN 10 MINUTES OF THE BOOKED TIME! I've got a much better plan, if they turn up late then you get a 10% discount for 5 minutes late, 20% discount if they're 10 minutes late and 30% off for 15 minutes late and so on…. Anyway, there we were, driving along the recently widened 'Great Eastern Highway', and looking out for the sign to the 'International Airport' …. (if you don't know, the 'Domestic Airport' and International Airport are about 8 kilometres apart) . Ahead we spotted TWO Airport direction signs, one pointing to make a left turn, and the other pointing to a right turn, with some smaller writing underneath… now this is a 4 lane highway junction…and just to be on our guard we took the centre left lane…but it wasn't until we were really close to the signs (and I mean REALLY close, and with 2 passengers AND the driver looking intently !) that we could make out the designation, in small boxes, which read T1 & T2 on the right hand sign, and T3 & T4 on the sign pointing to the left…What the hell happened to the old signs saying either International or Domestic terminal? When did we rename the terminals…are there really 4 terminals at Perth Airport…. and which one is the one for International flights ??? Is this a plot to give visitors the impression that Perth is a BIG city with a BIG airport…. Singapore Airport only has three terminals fachrisake….London only has four, maybe five… Perth must be the only city in world with one international terminal and THREE domestic terminals ( yes three…really !) ….. two of which are in the same building as the previously named Domestic Terminal, and now just to really confuse people, the NEW domestic Terminal 3, which is apparently only for FIFO ( Fly In-Fly Out mine workers to and from the NorthWest of the state) has been built next to the International Terminal…WTF! Not one of us in the car had any idea which terminal our flight to Dubai was leaving from, and by the time we discussed that it was probably from T1, we had already passed the correct turnoff and were headed for the 'old' Domestic Terminal…. OK, no big deal, we were ahead of schedule anyway, but if time was tight we could have been in big big trouble…but….we eventually made it to the correct airport road and 20 minutes later we were being dropped off…. but not before AJ had a minor skirmish with a security guard, showing his authority by waving a red light around and around, apparently in an attempt to advise AJ not to park her car right outside the check-in area….”Why not?” she asked… ” urrr…Ma'am..is not being allowed ma'am ” he said…or at least I think that's what he said… his accent was so thick and , well 'accented' that it was difficult to tell….anyway AJ wasn't having a bar of it, and she ignored the demand of this obviously 'New Australian' by reversing into a spot being vacated by a Taxi.. probably a late arrival too, the Cab that is, not the driver!…. He wasn't very happy at being ignored, especially by a female as well probably… .. and I'm thinking out loud here, is it just me, but have you noticed that the vast majority of security guards at events and establishments in Perth seem to be from India, Pakistan or Bangladesh? What's with that anyway…and it's not like they are similar to the Sikh security guards you see protecting banks and jewellery stores in Singapore and Hong Kong…big tall burly blokes with handlebar mustaches and fancy Turbans, toting a rifle even taller than them. ..I mean, you'd never disobey an order from them would you..but these new breed are usually pretty small in stature…some, ( but not me) would describe some of them as scrawny even…if you wanted to be unkind that is…… but Security Guards….Mmmm

Check in was easy…after a couple of drinks in the departure lounge, boarded the flight to Dubai…and plane took off at exactly the scheduled time of 22:30…. it's a full flight….and blessedly, not a child in sight !…..and well here I am…we are…. still waiting for a drink to be served and it's now quarter past midnight….but hope is at hand…almost within reach even….the hostie with the drinks trolley is now so close I can see the whites of her eyes…mind you, she has taken at least 20 minutes so far to serve just 5 rows…is she the slowest person ever in charge of a drinks trolley… so at her rate of pouring I could be in Dubai before she reaches us … this must be part of the 'responsible drinking' strategy of Emirates…slow down the service so much, that between drinks you get plenty of time to achieve sobriety again… Yineka-mou tells me that it's my duty to inform my Brother-in-Law GJ about the slow ( but responsible) service of alcohol, as he's due on the same flight next week….and GJ has a solid reputation for impatience… you could even go so far as to describe his behavior as intolerant sometimes, especially so when it comes to getting between prompt delivery of a glass of liquid refreshment and he. Good Luck with that GJ!!

OK… drinks have at last reached us…. white wine for YM, red for εγω…. Cheers, Adios and Buenos Notches….thee you in Bar-tha-lona si? 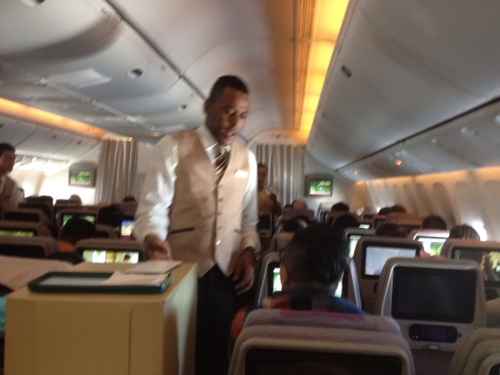 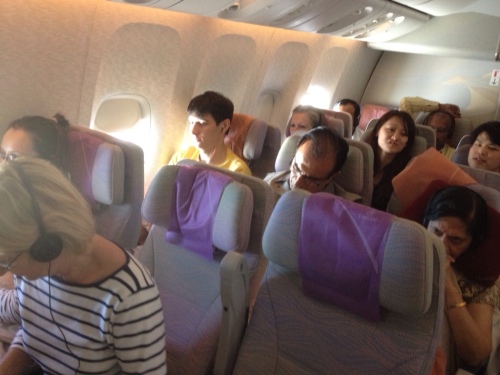