We wake this morning in Suva, the most nostalgic of the ports visited, as it's where YM and I had our first 'date' together on dry land. Never thought then, that one day, 41 years later, we'd be back, and still, happily, together.

Boy, am I glad that we had the opportunity to visit the South Pacific islands back then, as they sure have changed…..and not for the better either. In the days before 'containers' were introduced, most of the ports had a certain 'ramshackle' charm about them. You could actually see the different types of cargo that had been unloaded onto the docks, or the local produce stacked hapazardly waiting to be loaded onto small cargo boats. But now? When I get up and open the doors to the verandah I think we may have docked in the middle of an industrial estate by mistake… Kwinana for instance, but without the charm!!!

All I see is containers stacked high all around, and a hive of activity going on (yes, actually…remarkable for Fiji eh?). Huge fork-lift trucks moving back and forth carrying containers, a noisy container ship docked a few metres away unloading even more containers….. what has happened to my sleepy old port? Where is the Fiji Police Band that were always playing away on the jetty as we arrived, to welcome us? Where are all the locals and kids who used to wave to us from the wharf. Gone forever, except in my memory ( and in some old 'super-8 movie film footage I still have somewhere…. must get it out when I return home.) Suva has 'progressed' and is now a closed port, with no entry to any non-authorised personnel. The weather probably doesn't help matters, as it's pouring with rain again….. I must have visited Suva many dozens of times, and I can only remember it ever being sunny back then. ( was it really though?) The only thing the same is the name, Kings Wharf, but as you can see, they have 'filled in' the gap between wharf and jetty.

Our first mission today is to visit 'Millenium Apparel in the suburb of Nabua, to pick up YM's skirt. While unpacking, after arriving onboard, YM discovered that her favourite skirt ( I call it 'Pocahontas') had been left behind at home….disaster! She was desperate to have it for the voyage, ( dont ask me why, she has brought enough clothes with her, that she can easily wear something different every day. Maybe it's for the Fancy Dress competition, but I'm not game to ask!) so she contacted her best friend AJ, back in Perth. Now AJ has a clothing business with links in Fiji, so YM asked her to go to our home, pick up 'pocahontas', Fed-Ex it to her garment factory in Fiji, where we can, with a bit of luck, be able to collect it.

Heading ashore, we hail a passing taxi on the road outside the port…..but quickly realise we haven't made the best choice…. by it's condition this cab has seen better days. YM notices that the 'meter' already shows $6.50, so politely asks the cabbie to reset it. Apologising profusely, he obliges, then asks us if this is our first time in Fiji. ” No mate” I tell him ” many times, I was last here 36 years ago, when this taxi was still a new one !” ” Yes, it's a bit old” agrees Fiji Fred, who then trys every trick in the book to get us to use his services for a tour of Suva, but YM is a women on a mission, and only wants one thing, to get her hands on 'Pocahontas' as soon as possible. After a 20 minute knuckle-biting drive, weaving in and out of the heavy traffic ( the cab has no seat belts, very poor suspension and I suspect, suspect brakes!) we arrive at 88 Jerusalem Road. We ask FF to wait for us while we go inside the garment factory to meet the manageress, Yasmin. Downstairs we can see at least 100 Fijian ladies busily working away at their sewing machines, and we ask one of them where Yasmin is. She's in her office upstairs, where we go to meet her. After introducing ourselves…. Bula bula, Bula bula etc…and then being introduced to the rest of the managerial staff in the upstairs offices…..more bula bula'ing….. Yasmin eventually hands the parcel over to YM with the remark “Beautiful skirt” , and we can see that the TNT package has been opened. I'm pretty sure that by now copies of 'pocahontas' have already been made, and sold at a fraction of the price that YM originally paid.

Fiji Fred is waiting outside for our return trip to town, and again begins his 'Schpeil', offering to 'show us the sights'. If it hadn't been raining, and if FF had owned a car at least half the age of this one, we might have succumbed, but instead we asked him to drive us into the centre of Suva. I also asked him (told him?) to slow down, as his driving style was making me extremely nervous, and that while I liked Fiji, I had no wish to spend the last remaining minutes of my life here. He responded to my 'request' by slowing down to little more than a crawl, and probably thinking to himself ” I'll show this frightened little bugger….let's see if he likes this speed instead !” Half an hour and thirty Fiji dollars later, we were dropped off back in the city, and YM and I make our way to the small bridge over the creek, on the corner of Cumming street. It was the place where we first arranged to meet each other all those years ago, and of course we wanted a photo taken on that very same spot….. a passer-by, a passenger from the ship, obliged with a quick 'snapshot' for us.

Although I'll bet not half as good as my latest 'venture' into tourism retail.

We make our way up Stinson Parade, with the intention of stopping for a drink at the Grand Pacific Hotel, but find that it's closed for renovations. The planned trip to our old 'stomping' grounds' at the Trade Winds Hotel', a resort outside the city, is next on the agenda, but what with the weather and all, we decide to give it a miss…with our many happy memories of the place, we don't wish them to be shattered as well.

Some things in Suva haven't changed though, and there are still a lot of intoxicated Fijians around, especially as you get closer to the vicinity of the port. The shops near the port seem to be paranoid about security, and one in particular closely resembles a maximum security prison. Is crime really that bad here…..well yes, apparently.

The best option now, with no sign of the rain stopping, is the Oosterdam, so we head back towards the picturesque 'Container Terminal Kings Wharf , and the welcoming luxury of the 'Dam' ship. In the nick of time too, as just as we pass the gates to enter the wharf ( and yep, the security on guard does check our passes) the rain really begins to throw it down. I think I'll wait at least another 40 years before visiting this particular tropical paradise again!!!! 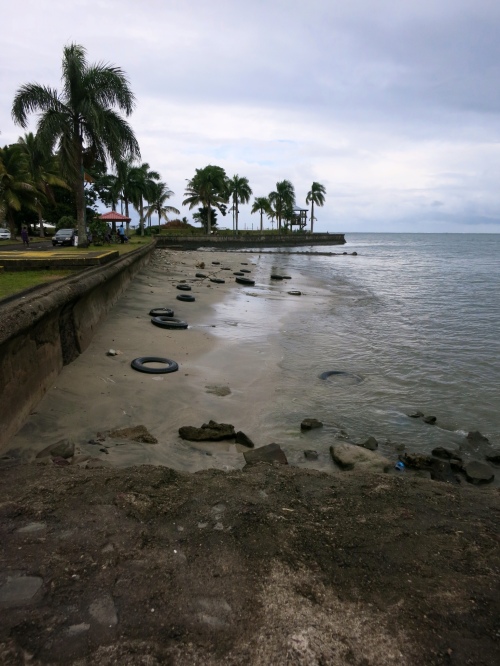 2 thoughts on “The rescue of Pocahontas.”

Follow Travels with a TomTom on WordPress.com
With Compliments