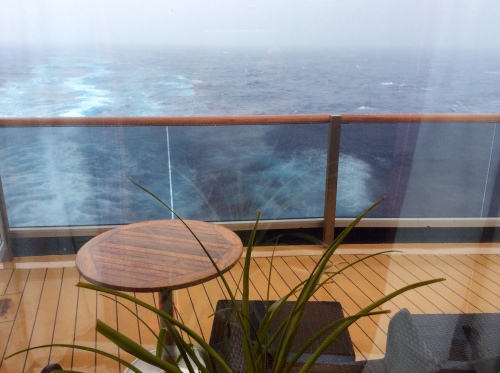 We've now been onboard this 'Dam' ship for 5 nights now, since leaving Sydney on Sunday. The first couple of days Captain Henk Draper ordered 'full steam ahead' (or whatever the command is nowadays on these non-steam vessels) in order to leave behind as quickly as possible the remnants of Cyclone Ita. The seas were quite 'lumpy' and steaming along at 25 knots, a bit noisy in our aft cabin ( We are on a ship, so I refuse to call it a 'Suite', despite HAL's terminology!). At that speed the vibration is quite noticeable, and YM has been questioning my judgement in picking this particular 'cabin'. I chose it because it is one of the few 'large corner suites', with a huge wraparound verandah, and I did assure YM that she wouldn't feel any vibration nor noise…. unlike the 'Australis' I said, these modern ships with Azimuth Power Pods ( I made that up!) don't vibrate at all… YM has suggested ( Suggested doesn't quite convey the true meaning of what she actually said or meant) that we move cabins, but as all the other De-Luxe 'Neptune' Suites are occupied, the only alternative is to move to an 'inside' cabin on 'B' Deck, or stay put in number 7142. ( or, she threatened, disembark in Noumea and fly to Vancouver!) 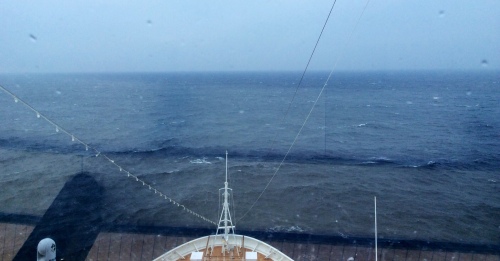 On waking up after the 2nd night, the seas were calmer, the sun was out and the Captain had slowed down to normal cruising speed….. but best of all, you could no longer detect any 'vibration' or engine noise in our cabin, it was so quiet the only sound she heard was my gentle snores. YM has now conceded that my choice was, after all, a good one, and so she is going to stay put. ( Phew!)

Monday morning at 10:30 YM and I attended a 'Suite Welcome Party' to meet 'Henk' the ships Captain. What can I say…except…I've been to far livlier funerals. Twas hardly worth getting dressed up for, and certainly not worth missing breakfast for ( though we did both!) I managed to procur a 'Bloody Mary' from a passing waiter, (this is my breakfast after all) and after tasting it, I thought it seemed to be lacking a certain vital ingredient, so I asked the waiter if he'd got his 'bloody's' mixed up with his 'virgin's'. Apparently not, as I would discover a few nights later it's not an uncommon occurrence in certain bars on the ship.

The Cruise Director, Shane, then gave a short speech welcoming us onboard the Oosterdam and wishing us all a very happy cruise, introduced the Captain, who said 'Hello Evrrrrrryone' in a verrrry thick Dutch accent' and promptly left. Well, he does have a job to do after all, and better he's on the bridge getting us safely to Noumea, than down in the Piano Bar meeting and greeting us lot. This isn't Costa Lines ya know!

With the formalities over, I looked around to find a drinks waiter for a 'top-up', but they seemed to be avoiding me. Maybe they had taken offence at my slur on their cocktail mixing ability, possibly not. “Sorry sir, but drink service has finished now” he said, “if you want a second one you must pay”. Mmmm OK, so the cocktail party is really a 'happy hour' in reverse… you get one drink free and then you pay for the rest. Not wishing to be labeled as a 'cheap-skate', at least not so early in the voyage, I ordered another Bloody Mary, but asked him if this time it might be possible to add some Vodka to it, especially as I was paying for it now!

That night it was the first of the six 'Formal Nights' on this voyage, and rather than have to 'schlep' a Tuxedo around with me in Canada, I'd placed an order with Holland America Line ( henceforth known as HAL), for the 'Monkey Suit' to be delivered to my cabin on embarkation day, along with two dress shirts, a bow tie, cummerbund and also a pair of 'patent-leather' shoes. The size of the suit seemed to reasonably resemble the sizes on the order form I'd placed, although my legs seem to have grown longer since being at sea again!! Well its either that or the trousers were sent a little on the short side . Where I had made a small mistake was with the shoe size, as an Australian size 9 shoe is NOT the same as an American size 9 shoe. Are they a tight fit? You bet they are! . Wearing them for the first time, I was reminded of the African-American saying about happiness…. you may have heard it yourself…. how it's a tight part of the female anatomy and a loose pair of shoes that'll make a man happy…. but if it's the reverse, well you get it, don't you. Mind you, I'm only talking about the shoes, OK. So, all dressed up and nowhere to go? Not at all….we have the Captain's 'Toast' ( with free glass of 'Champagne'?) to look forward to, which is in the Theatre….. and it's another 'welcome aboard' to all the other Passengers…. it takes place just before the Grand Opening Show 'Spectacular' at 8pm. What a shame,….. unfortunately, we missed it, but never mind, there is another 'Toast' at 10pm for late diners like us. To celebrate our first 'formal' night, I book a table for YM and I in the 'special' restaurant onboard, 'The Pinnacle Grill', for which you have to pay US$29 per person. On arrival outside the Restaurant, I thought it must be closed, as looking thru the window,I could see no one else inside. However, the Maitre'd appeared and ushered inside to our 'reserved' table. We weren't the only ones eating there that night, there was one other couple as well, so the service is even more attentive than usual. We had earlier sent down one of the bottles of Veueve that BL had given us, and so drank a toast to his health ( and generosity) and also to the fact that he was NOT onboard with us as he had threatened to be !!!

Dinner was as good or better than you'd expect in a top-class restaurant anywhere in the world, and the service was impeccable. A good start to the cruise, but I'd better not dine like this every night or else my strict fitness regime of the past 6 weeks will have been in vain.

Sadly, due to us lingering longer over dinner than expected, ( it takes far longer than you think to drink a bottle of Veuve a bootle of Shiraz, and a couple of cocktails in the Piano Bar) we again missed Henks ( by now, El Capitano and εγώ are on first name terms) presumably brief welcoming 'Toast', and the chance to receive a glass or two ( Ha ha, make that one or none!) of HAL's finest sparkling vino.

Now, I'd really like to be able to tell you that the 'Show Spectacular' was, well, spectacular, I suppose…but I have to be honest with you here, and admit that I can't remember much about it at all. So I could say it was 'unmemorable' but I wouldn't be so unkind. After the show had finished, or maybe earlier, we then called in to the Piano Bar again, where Diane entertains….and this is becoming my favourite bar on the ship. Diane is a terrific pianist, and seems to know how to play, and sing, every request you make.

Tomorrow morning we arrive in the port of Noumea in New Caledonia, and as a few of you ( ex-Chandris'ites) reading this will be aware, it was never one of our favourite ports in the South Pacific, and I dont expect it to have changed much, hence, not too excited about it. We have nothing much planned except maybe a walk around the town too stretch our legs….and purchase some more wine!

PS: Our fellow passeengers onboard ( there are 1756 of them not including YM and εγώ ) are by my observation comprised of approximately, 60% Australians, 20% Americans, 15% Canadians and 5% others. If there are any Greeks aboard, I haven't met them yet, so haven't been able to keep up my bi-lingual skills….συγνώμη Κώστα!